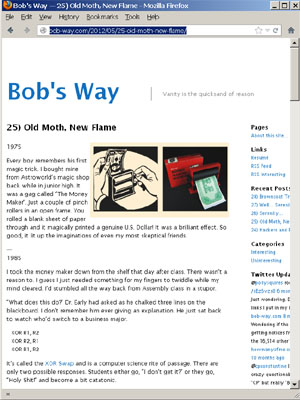 Bob Way has a great post up about his brainstorm for a file-sharing system that technically does not include the actual data it shares, but can reconstruct it from a relative measurement of it, which is stored.

This is much like coming up with a mold for a part and using relative vectors to describe it, so that when needed, it can be re-created using some seed data and thus used to create the part in question.

Whether or not this is legal is well beyond me, and probably beyond our legal system. There’s a good argument that it is, since whether the data is stored or not, there’s a method of reconstructing it.

However, this is something the courts should have to test their mettle against:

The one-time pad’s magic was a close kin to the XOR swap’s. Both worked by temporarily storing, not the data itself, but a mathematical distance between two chunks of data. It was like broadcasting your location by saying “I’m 5 miles North.” By itself that phrase is valueless. Unless the receiver knows exactly where you measured from, he has zero hope of finding where you measured to.

“Everywhere is 5 miles North of someplace.”

“Whose data is infringing who?” I thought to myself.

Thing were even worse for the Houston and LA files. Millions of people simultaneously referenced those each for their own reasons. They certainly couldn’t be claimed by any particular individual.

“There! Closed the loop.” Four locations encoded between four multiply-used data points. With no data attributable to only a single location.

Sure I’d lost the “one-time” nature of a pad cipher—but I wasn’t ciphering! This system would be used to find meaning, not to hide it. – “Old Moth, New Flame”, by Bob Way

It’s an insightful attempt to get around the problem of someone else’s data being at stake. The bigger question is how society’s going to fund all the software development, music and movies, etc. that we want if everyone pirates them.

Perhaps one answer is to violate a taboo and suggest that people aren’t equal, and some should have piracy rights, or at least extended academic curiosity rights. But then the madding crowd will clamor for that to be a “civil right” as well.